High in the dark house of Assisi Francesco Bernardone slept and dreamed of arms. There came to him in the darkness a vision splendid with swords, patterned after the cross in the Crusading fashion, of spears and shields and helmets hung in a high armoury, all bearing the sacred sign. When he awoke he accepted the dream as a trumpet bidding him to the battlefield, and rushed out to take horse and arms. He delighted in all the exercises of chivalry; and was evidently an accomplished cavalier and fighting man by the tests of the tournament and the camp. He would doubtless at any time have preferred a Christian sort of chivalry; but it seems clear that he was also in a mood which thirsted for glory, though in him that glory would always have been identical with honour. He was not without some vision of that wreath of laurel which Caesar has left for all the Latins. As he rode out to war the great gate in the deep wall of Assisi resounded with his last boast, “I shall come back a great prince.” 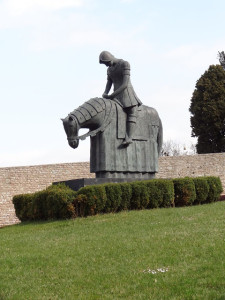 A little way along his road his sickness rose again and threw him. It seems highly probable, in the light of his impetuous temper, that he had ridden away long before he was fit to move. And in the darkness of this second and far more desolating interruption, he seems to have had another dream in which a voice said to him, “You have mistaken the meaning of the vision. Return to your own town.” And Francis trailed back in his sickness to Assisi, a very dismal and disappointed and perhaps even derided figure, with nothing to do but to wait for what should happen next. It was his first descent into a dark ravine that is called the valley of humiliation, which seemed to him very rocky and desolate, but in which he was afterwards to find many flowers.

But he was not only disappointed and humiliated; he was also very much puzzled and bewildered. He still firmly believed that his two dreams must have meant something; and he could not imagine what they could possibly mean. It was while he was drifting, one may even say mooning, about the streets of Assisi and the fields outside the city wall, that an incident occurred to him which has not always been immediately connected with the business of the dreams, but which seems to me the obvious culmination of them. He was riding listlessly in some wayside place, apparently in the open country, when he saw a figure coming along the road towards him and halted; for he saw it was a leper. And he knew instantly that his courage was challenged, not as the world challenges, but as one would challenge who knew the secrets of the heart of man. What he saw advancing was not the banner and spears of Perugia, from which it never occurred to him to shrink; not the armies that fought for the crown of Sicily, of which he had always thought as a courageous man thinks of mere vulgar danger. Francis Bernadone saw his fear coming up the road towards him…