September 10th is the Feast Day of St. Pulcheria (398 – 453). She was empress of Constantinople and had taken a vow of virginity. 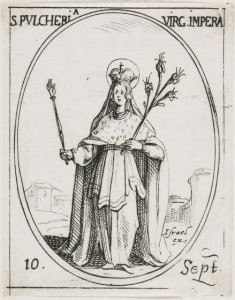 Pulcheria’s time as Augusta was marked by war with Sassanid Persia. Pulcheria and Theodosius were victorious and, according to historians, Theodosius had credited his sister’s vow of virginity as the reason for victory. “The troops were described by Sozomen as ‘ready to do anything for the sake of Christianity.’  With fanatical fervor Theodosius had made his sister’s virginity a tool of war propaganda, and because of her vow to be faithful only to God the hand of God would help Roman troops in battle against Persia.