The years 1550–1650 is known as Japan’s Christian Century. The first Jesuit missionary, Francisco Xavier, arrived in Japan in 1549; others soon followed. By 1600, Christians numbered in the hundreds of thousands and Nagasaki was the city with the largest Christian population in Asia.

The shogunate (“shogun” means “military commander”) soon saw Christianity as a threat, and outlawed it in 1614. Jesuit missionaries were expelled from the country and the persecution of Christians began. Over 40,000 Japanese who refused to abandon their faith were killed over the next fifty years. On September 10, 1632, fifty-five Christians were martyred in Nagasaki in what became known as the Great Genna Martyrdom. 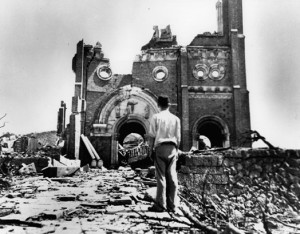 On August 9, 1945, a crew of American servicemen set out to drop a bomb that would incinerate the city of Kokura. (Another atomic bomb had been dropped on Hiroshima three days before.) Kokura, was clouded over, so they headed for Nagasaki instead.

It was Urakami Cathedral that the pilot spotted through a break in the clouds, giving him the visual sighting that was required to drop the bomb, which detonated 500 m (1640 ft) above the cathedral, killing over 70,000 people, including about 70 percent of Nagasaki’s Christian community. Hundreds of thousands were horrifically wounded. Dr. Gary G. Kohls writes: “What the Japanese Imperial government could not do in over 200 years of persecution, destroy Japanese Christianity, American Christians did in nine seconds.”

The Catholic chaplain for the 509th Composite Group was Father George Zabelka, who later become an outspoken critic of militarism and proponent of nonviolence.  Suggested viewing: The Reluctant Prophet. Link available on our Resources page.