Father Z believes that the collection to support the Archdiocese for Military Services is important. We believe, along with the author of the editorial, Mark Scibilia-Carver, that the comingling of militarism and Christianity raises certain questions that, after a decade of war, must be asked and addressed. We believe this is important. We see the collection for AMS as being representative of a bigger problem, one that demands an honest conversation. Some dialogue would be healthy for our Church and for our country.

We respect Fr. Z’s view, but we found his commentary to be defensive and reactionary. We wish he would have addressed the actual points Mark Scibilia-Carver brought up, in order to foster some dialogue so desperately needed, instead of characterizing negatively any Catholic who has concerns that are related to the military. If you depict someone with an opposing point of view as silly, irrational, and out-of-touch, then I guess you don’t have to address his argument.

Note: If you express concerns about violence and war, then you must be on drugs. 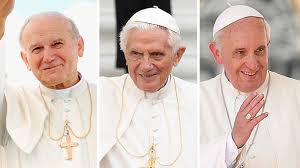 Note: Then the three popes quoted in Mark Scibilia-Carver’s article must have been on drugs. The always seem to be, in the words of Fr. Z, in “virulent tree-hugging reason free flower power mode.”

Not that anyone asked us, but this is our response to Father Z, which we wrote in the comments of his blog.

The hippies have a point here: Militarism inside the Church discourages serious reflection on the moral gravity of war. Militaristic sermons reinforce the assumption that the U.S. military is a force for good. That assumption is debatable! When priests replace serious reflection about mass violence with unchecked glorification of all things military, they fail in their duties as priests. That’s not an “attack.” It’s legitimate criticism. We need to have a dialogue about the appropriateness of militarism inside the Catholic Church. Toward that end, check out our manifesto at Catholics Against Militarism.

Father Z seems to think that anyone who criticizes the military, militarism, or U.S. foreign policy is a troop-spitting, drugged-up, hippie-flowerchild. That is not true! The Founding Fathers viewed a standing army as one of the biggest threats to liberty. James Madison wrote, “Of all the enemies to public liberty war, is, perhaps, the most to be dreaded because it comprises and develops the germ of every other.” Marine Corps Major General Smedley Butler wrote, “War is a racket…It is conducted for the benefit of the very few, at the expense of the very many.” In 1961, Dwight Eisenhower warned that the military-industrial complex created the potential for “the disastrous rise of misplaced power.” Michael Scheuer, a CIA veteran who ran the Counterterrorist Center’s bin Laden station from 1996 to 1999, wrote, “The fundamental flaw in our thinking about Bin Laden is that ‘Muslims hate and attack us for what we are and think, rather than what we do’…It’s American foreign policy that enrages Osama and al-Qaeda, not American culture and society.” I am a former Marine, a veteran of the Iraq War, and a conservative/libertarian who agrees Father Z and his readers about most theological and political issues. When conservatives accuse war critics of “attacking” the troops, they’re no different than liberals who accuse welfare critics of “attacking” the poor.

P.S. There is not a single verifiable instance of antiwar protestors “spitting” on troops returning from Vietnam. That’s an urban myth used to silence war critics. http://www.slate.com/articles/news_and_politics/press_box/2000/05/drooling_on_the_vietnam_vets.html

For the record, Father Z, neither of us here at CAM smokes hash or owns a bong. We do, however, like the guitar. You have to admit these are awesome. Let’s get coffee sometime.

2 thoughts on “Our Response to Father Z”