When reading about Veterans Day 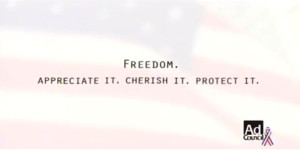 On Veterans Day weekend, it also becomes painfully obvious (and depressing) that the message we will hear at church on war is also in absolute lockstep with the “messaging” created by the Ad Council (formerly known as the War Advertising Council) on behalf of the federal government back in 2002 for the Campaign for Freedom:

Peggy Conlon, president and chief executive of the Ad Council, said, ”According to research, Americans are looking for messages that will inform, involve and inspire them during the war on terrorism.”

And freedom was a theme that resonated. ”Freedom embodies the principles upon which this nation was founded,” Ms. Conlon said. ”Freedom is our strength. However, freedom is also at risk. The ‘Campaign for Freedom‘ recognizes that it is every American’s responsibility to protect the foundation of our nation, and this is the heart of the strategy.

The only difference is that the federal government had to pay the Ad Council a lot of money to produce and distribute certain messages to United States citizens to “involve and inspire” them, and the Christian Churches have distributed those same exact messages, unqualified, for the past decade for free. 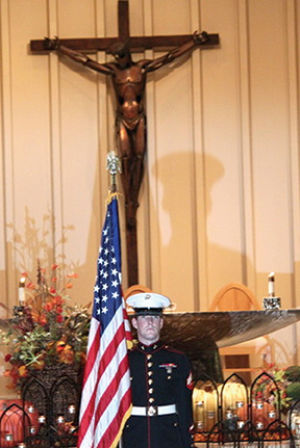 At a Veterans Day Mass at St. Barnabas Roman Catholic Church “members of the community who have served or are currently serving to participate in the liturgy, which will begin with a procession that includes veterans carrying the respective flags of the Army, Navy, Air Force, Marines and Coast Guard. Veterans from various wars, including World War II, Vietnam and Korea, will serve as gift bearers for the liturgy. The Mass will also feature the official songs and hymns of each U.S. military branch sung by the St. Barnabas adult and children’s choirs.”

A Veterans Day Mass will be scheduled to take place on Friday, Nov. 8, at St. Anthony’s Catholic Church in Colorado County where veterans will be introduced after mass. Fifth and sixth grade students from St. Anthony School will then host a presentation for the veterans, performing a variety of military service songs. At least this one is happening after Mass, not during.

Also a tradition in Colorado County: Members of VFW Post 6113 and American Legion Post 383 participate in programs that take place at the Columbus Junior High School-Riverside Campus, Columbus Elementary School and St. Anthony School. Of course they send two guys to talk to the kids who “did not regret having to go” there. They are probably the only two Vietnam War veterans who feel that way. We wouldn’t want to send any veterans to go talk to the children who saw that war as a horrible waste of life. We wouldn’t want to send anyone to talk to the children who might be less that “proud” of what they did in Vietnam, or regret it, or see it as utterly pointless, or utterly evil. We wouldn’t want that. (See approved messaging above.) 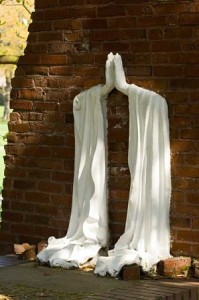 A University of Portland photo. The praying hands memorial on UP campus is site of Veterans Day ceremony.

At the University of Portland, a Veterans Day ceremony will take place after a 24-hour candlelight vigil with Air Force and Army cadets standing guard beginning at 11 a.m. on Sunday, Nov. 10. (This is the one sponsored by the Air Force and ROTC.) At least this one will only involve adults.

Saint Barnabus Catholic Church claims that the message of the Veterans Day ceremony will be “Peace on Earth.”

“The Mass will focus on peace, not violence or war,” said Kitty Ryan, pastoral associate at St. Barnabas. That’s a bold bit of lip service and Orwellian doublespeak as Kitty Ryan then goes on to say: “Since humanity has not yet discovered how to resolve conflicts in a peaceful way, war and violence remain a reality in our lives. No matter how much we are against war and violence, however, we cannot ignore the service these men and women have provided to us in defending our freedom.”

Ah! You knew it was coming. To Kitty Ryan I would say: Though violence is a reality in human experience, we, as Catholics, cannot ignore the example of Jesus Christ, who renounced it. True, Jesus did not reprimand soldiers for their chosen line of work, just as he did not reprimand tax collectors or prostitutes, but he also did not say that the soldiers will set you free; he said the truth will set you free. Then some soldiers brutally murdered Him. We tend to ignore these overly Jesus-y facts, though, on Veterans Day, because it’s not consistent with the dominant messaging approved by our sponsors.

How can we marvel that war remains a part of our lives as humans when, every time a child hears about how horrible war is, that child also has to be reminded how exciting, important, necessary, and noble it is? “Freedom is not free” and this example from the Statesman.com:

The main guest speaker of the event was Dick Jacobs, a retired Lieutenant Colonel in the Air Force …During the years of 1967 and 1968, he flew over 100 missions over North Vietnam. Jacobs gave vivid descriptions of two reconnaissance missions in particular, one in which the plane took three hits from enemy fire and made an emergency landing in which a barrier luckily stopped the plane. His stories were filled with harrowing detail and suspense and he promised to come back to share more next year.

There are plenty of examples of humans resolving conflicts in peaceful ways! John Kennedy, our first Catholic President, managed to avoid a nuclear war by responding to his enemy, at great personal risk, when his enemy reached out and tried to start a personal conversation with him. By doing so, he basically saved the world. Kennedy, too, “paid the ultimate price,” (Nov. 22 marks the 50th anniversary of his death, by the way) but I don’t suspect we’ll be hearing about his bravery and courage at Mass anytime soon. Kennedy didn’t do what the Joint Chiefs of Staff wanted him to do and what they surely told him it was necessary to do to preserve Americans’ freedom. He went rogue and acted in accordance with his conscience, doing what he felt was necessary to preserve mankind. He had to keep his dialogue with the enemy a secret, as his actions would have been seen as treasonous. Is he a hero? No. You are only a hero if you dutifully carry out the will of the State/Pentagon. Future Presidents take note: You don’t become President of the United States to save the world. Your job is to advance your country’s “interests.”  (Know your place, or else…)

Not to mention, Kitty, let’s face it: stories that involve resolving conflicts in peaceful ways are simply not as glamorous and titillating as stories of war, which is why we don’t hear about them as much, or ever. But just because there is no cable channel dedicated to peacemaking (we have the Military and History channels dedicated to war making) doesn’t mean it hasn’t happened or that it can’t happen or that it doesn’t happen! As Pope John Paul II said, to reach peace, teach peace. The Church has totally dropped the ball on that. All of this “honoring” of veterans has gotten way out of hand and it sends the exact opposite message, especially to kids who are so impressionable. It sends, instead, the message of the pagan Roman adage: Si vis pacem para bellum—”If you want peace prepare for war.”

To “glorify” means to “magnify.” We go to church to glorify god and worship Him. This over-the-top Veterans Day pomp during the liturgy magnifies not God but the aims, means, priorities, and values of the state. It is a form of brainwashing, and it is disturbing to see children roped into it. It is completely unbalanced by other perspectives on war and peace, which local Catholic leadership should be there to provide. Kitty Ryan is right that war and violence remain a reality in our lives:

If pastoral associates want a Mass with a message of “Peace on Earth” on Veterans Day, she may want to start by resisting the inclination to dismiss entirely the very idea of peace and its possibilities in Christ. If JFK had believed that it was impossible for humans to resolve conflicts in peaceful ways, well, we’d be living, or not living, on a very different planet.