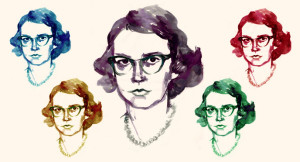 “The word Holocaust is never used in the story—nor are Jew and Hitler. In the absence of specificity, the mass murder feels somehow even more mysterious, senseless, and unspeakable. But it also puts the reader more firmly in Mrs. Shortley’s perspective: completely lacking any context that would move her to see this heap of bodies as victims, as human, as people like her.”

“The story is full of such barbs, suggesting that the perceived racial pecking order ultimately overrules any notions of Christian charity. ‘I am not responsible for the world’s misery,’ Mrs. McIntyre thinks to herself as she scolds Guizac.”

Apparently PBS turned the story into a short film with Samuel L. Jackson…