In 2005 Justin Raimando wrote this incredible defense of Pope John Paul II. Can’t believe I missed it. He writes “John Paul II is a unique figure, a giant of a man who towers so high above his critics that to focus on the latter is, in a sense, an injustice. But somebody ought to remind 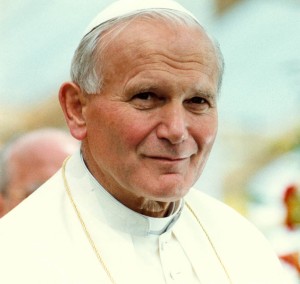 the world of the sins of his detractors (even as today, they praise him, or hold their tongues), and it might as well be me, a sinful unbeliever. I may be ‘exuberantly pagan,’ as neocon enforcer David ‘Axis of Evil’ Frum put it, but I recognize a real saint when I see one…” Here’s more.

“’A defeat for humanity’ is how John Paul II characterized the Iraq conflict. The Vatican rejected the arguments of neoconservatives, who sought to replace the “just war” theory that had ruled the Church since the time of St. Augustine with their own preemptive war doctrine, a throwback to the pagan era. As Bush and his British poodle prepared to go to war over nonexistent ‘weapons of mass destruction,’ the Pope sent a message to Roman Catholic military chaplains attending a Vatican-sponsored course on humanitarian law expressing the great ‘comfort’ given to him by the antiwar movement, which was taking to the streets in massive numbers: ‘It should be clear’ at this point in human history, he declared, that a ‘large part of humanity’ has rejected war as a means of resolving conflicts between nations. (Self-defense, he averred, is another matter). Hailing the ‘vast contemporary movement in favor of peace,’ the Holy Father backed up his rhetoric with action, calling on Catholics to fast in protest against the coming war and sending a diplomatic mission to Baghdad.”