I went to the Catholic church across town tonight, and this is what I saw. There is the tabernacle in the middle. On the left, a banner quoting Matthew 2:2. On the right, three people employed by the U.S. military, one from each branch, looking very prayerful, an American flag flying above them, and above that a cross in the sky (which eerily resembles the “cross of light” that Constantine saw, according to some legends of the Battle of Milvian Bridge). 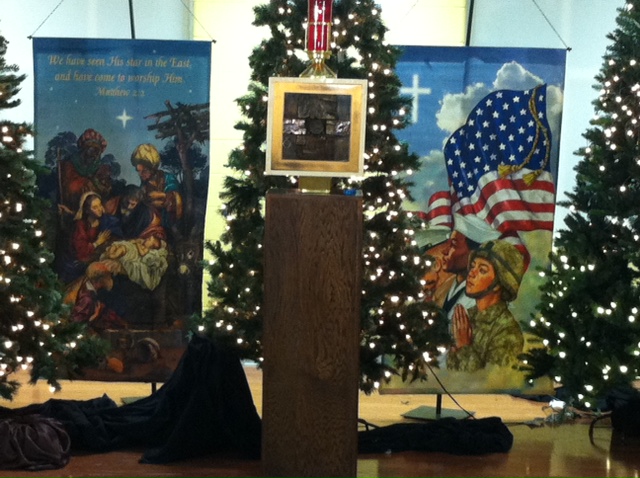 Visually, what is the most prominent symbol in this display? The American flag, of course. The baby in the manger is upstaged by the reverent looking woman in fatigues and her comrades-in-arms. The cross is like a faint wisp of cloud compared to Old Glory!

Does this strike anyone else as out of place, offensive, and inappropriate, not to mention totally creepy? I am going to write to the priests and find out why this was placed on the altar at Christmas. Here is a better look… 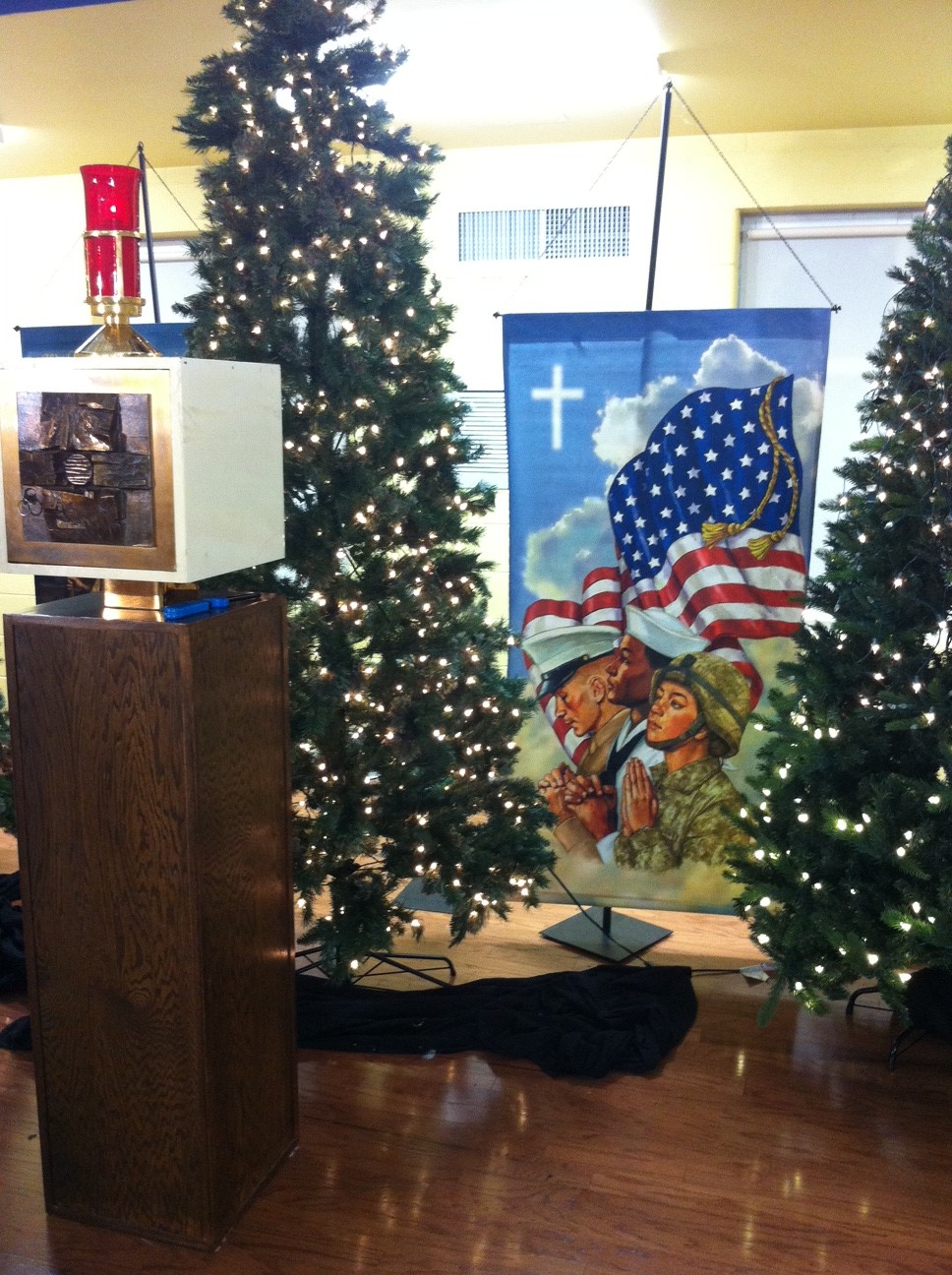 Barf. Is Memorial Day, Fourth of July, and Veterans Day not enough? Must we be subjected to military worship in church on Christmas, too? What is the purpose? What has this to do with the birth of Christ? More importantly, what kind of message is this sending, and does that message reinforce or contradict what Pope Francis had to say in his Christmas message?

“True peace  – we know this well – is not a balance of  opposing forces…Peace calls for daily commitment, but making peace is an art…Looking at the Child in the manger, Child of peace, our thoughts  turn to those children who are the most vulnerable victims of wars… Wars shatter and hurt so  many lives!…Prince of Peace, in every place turn hearts aside from violence and  inspire them to lay down arms and undertake the path of dialogue….Heal  the wounds of the beloved country of Iraq, once more struck by frequent acts of  violence…. Look upon the many children who are kidnapped, wounded and killed in armed  conflicts, and all those who are robbed of their childhood and forced to become  soldiers.…God is peace: let  us ask him to help us to be peacemakers each day, in our life, in our families,  in our cities and nations, in the whole world.”

Is it not a contradiction to see this in church and then hear this from a Bishop:

WASHINGTON—Pope Francis’ first message for World Day of Peace offers a profound challenge to all people to see each other’s humanity and pursue dialogue and peace over war and conflict, said the chairman of the U.S. bishops’ Committee on International Justice and Peace. Bishop Richard E. Pates of Des Moines, Iowa, welcomed the release of “Fraternity, the Foundation and Pathway to Peace,” December 12.

“Pope Francis offers a message both simple and profound: when we fail to recognize other people as our brothers and sisters, we destroy each other and ourselves,” Bishop Pates said. “This challenges everyone from governments and corporations to individuals and families in the course of our daily lives.”

“In God’s family, where all are sons and daughters of the same Father,” Pope Francis wrote, “there are no ‘disposable lives.’” The pope drew on the story of Cain and Abel in Genesis to illustrate that “we have an inherent calling to fraternity, but also the tragic capacity to betray that calling.”

The pope listed war, globalization, threats to religious freedom, human trafficking, economic disparity and abuses of the financial system as examples of fraternity breaking down and leading to violence against people.

“In disagreements, which are an unavoidable part of life, we should always remember that we are brothers and sisters, and therefore teach others and teach ourselves not to consider our neighbor as an enemy or as an adversary to be eliminated,” the pope wrote. “Give up the way of arms and go out to meet the other in dialogue, pardon and reconciliation, in order to rebuild justice, trust, and hope around you!”

There is just no way around this: The military represents “the way of arms” that Pope Francis is blatantly saying must be “given up.” If individual Catholics want to join the military and fight the U.S. government’s wars, that’s their business, but let’s keep militarism away from the Mass and out of our churches, especially at Christmas! It should not be implied that “the troops,” in spite of their chosen vocations of war making, let alone because of their chosen vocations of war-making, have somehow been elected to sit at the right hand of God. Enough, enough, enough.

I don’t mean to be cheeky here. I am simply amazed (and yes, heartened) by this heroic and impulsive act of self-sacrifice. On December 18, 2013, Ayyub Khalaf, a 34-year-old policeman in Iraq, wrapped himself around a suicide bomber to shield people from the blast, thereby saving dozens of innocent lives.

There is no greater love than this! May Ayyub Khalaf rest in peace.

Over 8,000 people have died in Iraq this year (Iraq Body Count) making it the bloodiest year for the country since 2008. In November alone, 948 people were killed as a result of violence in the country. 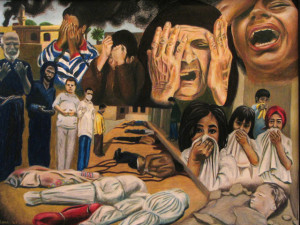 “Despair of Humanity: Iraq War,” by visual artist Erin Genia, made from images found on independent and foreign news sites

Pray for peace in Iraq.

This is a poem someone wrote on the Internet. I believe the poet’s name is Will Manning?

I heard of your valor, those that you saved
Arms outstretched, willingly embracing hate as it came
Did you know those who came, for them all you gave
Between righteous, pious and afraid, you staid
Hugging evils vested demon who came, secured in your arms it stayed
For you many have prayed, I pray, there are more like you
For in your actions, freedoms liberty is stayed