The following was written by Rev. Emmanuel Charles McCarthy:

Again and again it must be stated that the universal ‘big lie’ of the Catholic, Orthodox and Protestant Churches is that war, violence and enmity are activities in which Christians can participate and still be following Jesus and doing the will of God as Jesus reveals that will to humanity. To plant and perpetuate this blatant falsehood in the minds of Christians from birth to death has been one of the specific objectives of all the Christian Churches and their leaderships for the last 1700 years. Not one of the mainline institutional Churches that exists today or that has existed for most of the last 1700 years could exists as it exists without the use and justification of violence and enmity in the name of Jesus. Yet, there is not a scintilla of evidence in the Gospels for anything other than that Jesus by word and deed rejected, without reservation, violence and enmity as His Way and as the Way for those whom He chose to be His disciples. Nevertheless, around the world on a daily basis, in tens of thousands of Catholic, Orthodox ad Protestant niches, this anti-Gospel word goes out, “Violence, war and enmity are compatible with the teaching of Jesus.”

On Saturday, October 7, 2017, the designated worldwide Feast Day of Our Lady of the Rosary in the Roman Catholic Church, I happened into one of these anti-Gospel proclamation niches. Attending Mass that day I heard the priest in the pulpit fill the minds of the Christians in the congregation with a mishmash of historical facts, embedded Catholic fables and outright theological untruth, the purpose of which was to promulgate the idea that God and Mary were on the Catholic side, supporting the Catholic killers in a homicidal political-economic-religious naval battle against Islam i.e. the Battle of Lapanto on October 7, 1571.

The priest began by stating the historical fact that Pope Saint Pius V sent and blessed the Holy League Navy, the Catholic Navy, which included the Papal Navy, out to destroy the Muslim navy in the Gulf of Lapanto. Although greatly outnumbered he said, (the actual number was 280 ships to 212) the Catholics won the battle, which Pope Saint Pius V attributed to the Rosary being prayed in Rome for a victory. Pope Saint Pius V—who before becoming Pope had worked himself up to being the Inquisitor General of the Roman Catholic Church—declared October 7 to be the Feast Day of Our Lady of Victories because of her part in bringing a homicidal victory to the Catholic Holy League. After his death the next Pope changed the name of the feast to Our Lady of the Rosary, which it remains to this day. However the change of name did not change the message that the leaders of the Church—to this very day—universally communicate to Catholics about the meaning of the feast, namely, prayers to Mary, especially the Rosary, can procured a victory by homicidal violence over an enemy. And by simple logical extension, praying to Mary can obtain a violent victory over the enemies of Poland, France, Italy, Russia, the United States, etc.

Yet, the official teaching of the Church which is never mentioned in such homilies is “While the characteristics of the shalom of the Old Testament are present in the New Testament tradition, all discussion of war and peace in the New Testament must be seen within the context of the unique revelation of God that is Jesus Christ and of the reign of God which Jesus proclaimed and inaugurated. There is no notion of God who will lead the people in an historical victory over its enemies in the New Testament.” (The Challenge of Peace: A Pastoral Letter on War and Peace, United States Conference of Catholic Bishops, 1983, §39, 40).

Mary is not God. She can only intercede with God through her Son, Jesus, who is the Incarnation of God. It is absurdity in the extreme to teach that the Nonviolent Mary of the Gospels will intercede with her Nonviolent Son of the Gospels to help one partisan homicidal groups kill and maim more human beings than another homicidal group that it calls “the enemy,” and thereby win a glorious homicidal and “historical victory over its enemies.” Such an understanding of Jesus and Mary and their relationship to each other and to each and every son and daughter of the “Father of all” is loathsome and revolting.

The fact that the rulers of the various Churches in every nation and in every ethnic group permit, and indeed foster, around the globe in the lives of ordinary Christians such a monstrous belief about Mary deserves universal publicity and universal condemnation from the top down and from the bottom up. If there is to be a Feast of Our Lady of the Rosary, and I think there should be, remove it from the October 7th date, where it can be and is subverted into a piece of Marian military jingoism. Place it on a date where only the Christlike holiness, peace, love, trust and universal compassion—of the Mother of a Son murdered by state and religious rulers and the Mother of a Son Resurrected in love, by love and for love—shine forth the truth and glory of God.

Failure to take this definitive step of totally separating the Marian Feast of Our Lady of the Rosary from October 7 and the Battle of Lapanto will for certain result in solidifying the status quo. The Nonviolent Mother of the Nonviolent Jesus will continue worldwide to be invoked, not to help one love his or her enemies as Jesus loved His enemies, but rather to help one kill his or her enemies more efficiently than his or her enemies can kill. Bishops, priests, ministers and religious educators will continue to propagate, Mary Slayer of Muslim, e.g. in pre-school to adult pious books, magazines, sermons, Catholic art, Church windows, etc. And, as happened in the little niche of Christianity I was in on October 7, 2017, the relation will be drawn between invoking Mary for a victory at the Battle of Lapanto—which the priest erroneously claimed saved the Church—and fighting ISIS today!

Here is an example of one of the tens of thousands of Catholic niches glorifying the Battle of Lapanto and Mary Slayer of Muslim. This is a stained glass window immediately to the right of the main alter at the Papal designated Basilica of the Sacred Heart on the campus of the University of Notre Dame. Mary with the Baby Jesus presides over the Battle of Lapant in the upper left corner. 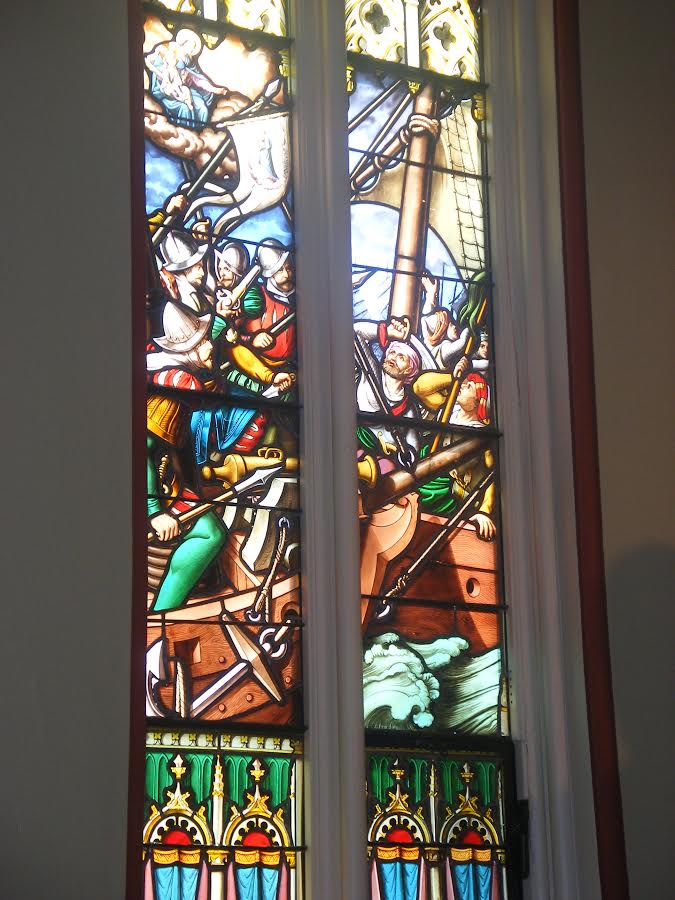