This was a forward I received the other day. I certainly feel nothing but compassion for the individuals in these photographs, but the conclusions at the end are, to my mind, heretical. Heresy is defined as an insistence on one half of the truth. 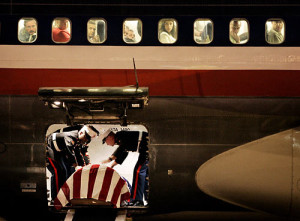 When 2nd Lt. James Cathey’s body arrived at the Reno Airport , Marines climbed into the cargo hold of the plane and draped the flag over his casket as passengers watched the family gather on the tarmac. During the arrival of another Marine’s casket last year at Denver International Airport , Major Steve Beck described the scene as so powerful: ‘See the people in the windows? They sat right there in the plane, watching those Marines. You gotta wonder what’s going through their minds, knowing that they’re on the plane that brought him home,’ he said. ‘They will remember being on that plane for the rest of their lives. They’re going to remember bringing that Marine home. And they should.’ 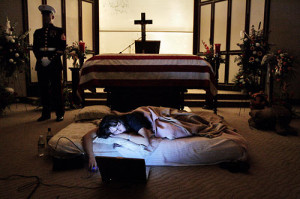 The night before the burial of her husband’s body, Katherine Cathey refused to leave the casket, asking to sleep next to his body for the last time. The Marines made a bed for her, tucking in the sheets below the flag. Before she fell asleep, she opened her laptop computer and played songs that reminded her of ‘Cat,’ and one of the Marines asked if she wanted them to continue standing watch as she slept. ‘I think it would be kind of nice if you kept doing it,’ she said. ‘I think that’s what he would have wanted.’ 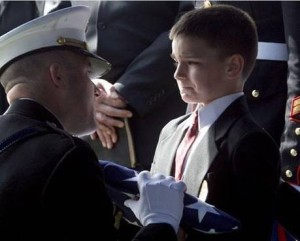 PLEASE KEEP THIS GOING!
Blue Fridays.
Very soon, you will see a great many people wearing blue every Friday. The reason? Americans who support our troops used to be called the ‘silent majority.’ We are no longer silent, and are voicing our love for God, country and home in record breaking numbers. We are not organized, boisterous or overbearing.

Many Americans, like you, me and all our friends, simply want to recognize that the vast majority of America supports our troops. Our idea of showing solidarity and support for our troops with dignity and respect starts this Friday — and continues each and every Friday until the troops all come home, sending a deafening message that every red-blooded American who supports our men and women afar, will wear something blue. By word of mouth, press, TV — let’s make the United States on every Friday a sea of blue much like a homecoming football game in the bleachers. If every one of us who loves this country will share this with acquaintances, coworkers, friends, and family, it will not be long before the USA is covered in BLUE and it will let our troops know the once ‘silent’ majority is on their side more than ever. The first thing a soldier says when asked ‘What can we do to make things better for you?’ is: ‘We need your support and your prayers.’ Let’s get the word out and lead with class and dignity, by example, and wear something blue every Friday.

IF YOU AGREE — THEN SEND THIS ON. IF YOU COULDN’T CARE LESS — THEN HIT THE DELETE BUTTON.

Only two defining forces have ever offered to die for you:
1. Jesus Christ
2. The American G. I.

One died for your soul, the other for your freedom.

YOU MIGHT WANT TO PASS THIS ON, AS MANY SEEM TO FORGET BOTH OF THEM.