In the first three centuries, there was an almost constant persecution of Christians. It did happen, however, that some emperors, more benevolent than others, revoked the severe decrees against Christians, but this did not prevent local governors from bringing them to trial – if not directly for their faith, then for insubordination. For example, when a soldier entered the army or received a promotion, he had to take an oath, invoking the names of pagan gods, and sometimes he had to take part in pagan rituals. Christians could not agree to this, and they were given over to punishment for disobedience. There were many such cases under Emperor Gallienus (ruled 260-268), who forbade persecuting Christians for their faith. 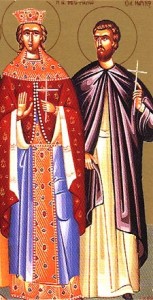 St. Marinus belonged to a noble family of Caesarea, in Palestine and had been an excellent soldier in the army. He was about to be honoured with the new title and position of Centurion. Suddenly another soldier who was eager for the same position, rushed forward, crying out, “Marinus is a Christian, and he would not sacrifice to the Emperor!”

Marinus lost his new position and was immediately questioned by Achaeus, the Governor. Marinus spoke up “Yes, I am a Christian and it is true, I did not sacrifice to the Emperor.”

Achaeus was very bold, “Then I give you three hours in which to change your mind and give up your beliefs.”

As Marinus left the judgment hall, he met Bishop Theotecnus of Caesarea. The Bishop led him to the Church and made him stand close to the altar saying, “Choose between the sword that you carry by your side, and the book of the Gospels.” Marinus immediately stretched out his hand and took the book of the Gospels, holding it firmly. “Hold fast then to God, commanded the Bishop, that strengthened by Him you may obtain what you have chosen! Go in peace.”

Marinus returned to the judge stating firmly, “I am a Christian and I wish to remain so!” He was immediately led away, to be killed.

St. Astyrius (Asterius), a Roman Senator, was present at the martyrdom. Taking off his cloak, he wrapped up the body of Marinus. Astyrius carried the body away on his shoulders and buried it with great honour. Later, in the year 260 A. D., Astyrius also became a martyr.