From the website of St. Lucy’s Church in the diocese of Scranton (abridged):

The story of St. Lucy is connected with a period of great political uncertainly and anxiety in the Roman Empire. After 400 years, the Roman Empire was declining under the constant onslaught of its enemies. Diocletian became the Emperor in 284 and set about trying to regain Rome’s former power and glory. It was into this time that Lucy was born into a rich and noble Roman family about the year 283 in Syracuse, Sicily. Lucy raised a devout Catholic and privately decided in her teenage years to consecrate her virginity to God and devote her worldly goods to the service of the poor. However, her mother, not knowing of Lucy’s promise and suffering from a bleeding disorder feared for Lucy’s future. She arranged Lucy’s marriage to a young man of a wealthy pagan family. 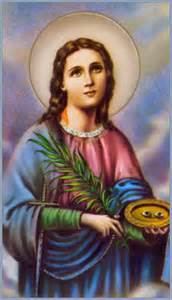 St. Lucy, holding the palm branch and dish with eyes

Not far away was the shrine of the famous virgin-martyr Agatha, who had been executed in the Decian persecution (5 Feb. 251 A.D.). St. Agatha came to Lucy in a dream and told her that because of her faith her mother would be cured. Agatha also told Lucy that God would do great things through her. Eutychia was in fact cured. Joyful at her cure, Lucy’s mother agreed to let Lucy help the poor and for now not marry.  As Lucy’s reputation grew in Syracuse, the clouds of persecution gathered over Sicily. Lucy was renowned for her beauty and her sparkling eyes.  It was said she had a radiance about her that came from her love for Christ.

Meanwhile, at the imperial palace in Rome, Diocletian realized that the empire was now too unwieldy and too exposed. To better manage the empire he split the Empire into three parts with himself as Augustus Caesar (or head Caesar). General Galerius was appointed Caesar in the East and General Maximian as Caesar in the West. They would report to Diocletian. Diocletian at first was very tolerant of the Catholic Faith. However, as the Empire reeled under the continued attacks of its many enemies, Galerius and Maximian persuaded Diocletian to attempt to reinstate the ancient pagan religion throughout the empire. It was thought that this would unify and strengthen the empire as in centuries past.

In 303 A.D, Diocletian issued three edicts that began the last and worst of the persecutions against the Catholic Faith. The first ordered the destruction of the churches and the burning of all Catholic writings, especially the Bible. The second edict was directed against the clergy. Great numbers of bishops, priests and deacons were arrested and martyred. Others were sold off as slaves in the salt and copper mines. The third edict was directed at the laity. Villages and towns would be leveled and their inhabitants slaughtered or sold into slavery for being Catholic.

In 304 A.D. the frightful persecution came to Sicily. The Roman governor, Pascasio, probably to court favor with the emperor, was determined to carry out the three decrees with the full weight of the Roman Army behind him.

With the persecution in full swing, Lucy had now to help the poor and her fellow Catholics who had taken refuge in the extensive catacombs underneath Syracuse. Lucy had become well known in Syracuse for her faith and charitable works. In these sorrowful days Lucy carried food and drink to Catholics hiding in the dark underground catacombs. It is said she wore a wreath on her head with candles to light her way because her arms were full of food and water. Word of her heroic deeds spread and did not escape the ears of informants. It was the pagan youth to whom Lucy had been betrothed, motivated by pride, greed, jealousy or a combination of all three, who in his anger he denounced Lucy to Pascasio, the governor, as a Christian. Lucy was now caught up in the great persecution of Diocletian.  Her patrician status could no longer save her.

Pascasio seized this opportunity to make Lucy an example of Rome’s greatness and displeasure. Thus, the governor wanted to destroy the beautiful “light” that was Lucy. He was not content to just kill Lucy’s body. Lucy had radiance about her, both physically and spiritually. It was his intent to show the Catholics of Syracuse that the Roman Empire was greater than their God. Lucy’s public humiliation was designed to discredit the power of Christ and His Church. And so Lucy, a beautiful young woman, noted for her eyes that shined with a glow of inner beauty and goodness was hauled before the governor. Lucy would be forced to renounce her faith and worship the pagan gods.  If Lucy could be forced to renounce her faith, than other Catholics would follow suit.

Pascasio order a public spectacle in the magnificent amphitheater of Syracuse. Looking down on the helpless Lucy was the governor sitting in the royal box, surrounded by politician and generals in their splendid Roman armor and vibrant red clocks.  The might of Rome pitted against Lucy.

The governor’s plan was to plunge Lucy into the darkness and degradation of sin. She was first condemned to suffer the shame of prostitution; but when the soldiers came take her to a brothel, in the strength of God, she stood immovable. No matter how they tried, they could not drag her away to that place of shame. In a desperate effort, a team of oxen was used, but to no avail. Frustrated, the governor demanded of Lucy, “How are you doing this?” Lucy could only respond that it was not she, but Jesus Christ.

Infuriated, he governor then ordered Lucy to be burned alive if she didn’t deny Jesus and worship the pagan gods. Lucy refused. Bundles of twigs were placed around her. When the soldiers tried to ignite the bundles, they would not burn. The governor ordered the wood to be soaked with oil, but the oil would not ignite. When asked how she was doing all this, Lucy could only answer once again that it was not her but the power of Jesus Christ. The pagans in the crowd were being won over by this hapless girl.

Sensing that his demonstration of Roman might was becoming undone, in desperation, Pascasio ordered Lucy’s eyes to be gouged out. Still, Lucy refused to deny Christ. Then Pascasio ordered a soldier to stab Lucy in the neck with his sword. She won her crown of martyrdom on December 13, 304.

In death, Lucy became an even greater example of Christian witness. Miracles started immediately.  Lucy was carried to the cemetery and in Roman tradition her body was prepared for burial in the family mausoleum. Here, they discovered that her eyes had been miraculously restored. To mark this miracle, Lucy is often pictured with a dish on which is a set of eyes.  She also hold the palm branch, symbol of victory over evil.