Suicide in the Trenches, by Siegfried Sassoon 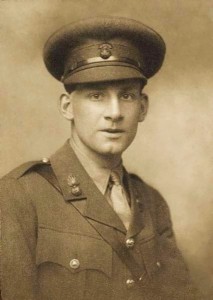 I knew a simple soldier boy
Who grinned at life in empty joy,
Slept soundly through the lonesome dark,
And whistled early with the lark.

In winter trenches, cowed and glum,
With crumps and lice and lack of rum,
He put a bullet through his brain.
No one spoke of him again.

You smug-faced crowds with kindling eye
Who cheer when soldier lads march by,
Sneak home and pray you’ll never know
The hell where youth and laughter go.

Born to a Jewish father and a Catholic mother, Siegfried Sassoon was a WWI war hero nicknamed “Mad Jack” for his astonishing feats of bravery.  He eventually became an outspoken critic of the war with his letter Finished with the War: A Soldier’s Declaration. He was a poet and wrote a memoir called Memoirs of an Infantry Officer. His poetry described the horrors of the trenches and satirized the patriotic pretensions of those who, in Sassoon’s view, were responsible for a jingoism-fuelled war. Late in life he converted to Catholicism. (So, you know, I think we can claim him! What a fascinating person…)