Ann Jones is author of the recently published book, They Were Soldiers: How the Wounded Return from America’s Wars: The Untold Story. 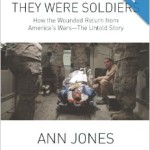 The following article written by Ann Jones on child soldiers was originally published at TomDispatch.com:

Congress surely meant to do the right thing when, in the fall of 2008, it passed the Child Soldiers Prevention Act (CSPA). The law was designed to protect kids worldwide from being forced to fight the wars of Big Men. From then on, any country that coerced children into becoming soldiers was supposed to lose all U.S. military aid.

It turned out, however, that Congress — in its rare moment of concern for the next generation — had it all wrong. In its greater wisdom, the White House found countries like Chad and Yemen so vital to the national interest of the United States that it preferred to overlook what happened to the children in their midst.

As required by CSPA, this year the State Department once again listed 10 countries that use child soldiers: Burma (Myanmar), the Central African Republic, Chad, the Democratic Republic of the Congo, Rwanda, Somalia, South Sudan, Sudan, Syria, and Yemen.  Seven of them were scheduled to receive millions of dollars in U.S. military aid as well as what’s called “U.S. Foreign Military Financing.”  That’s a shell game aimed at supporting the Pentagon and American weapons makers by handing millions of taxpayer dollars over to such dodgy “allies,” who must then turn around and buy “services” from the Pentagon or “materiel” from the usual merchants of death. You know the crowd: Lockheed Martin, McDonnell Douglas, Northrop Grumman, and so on.

Here was a chance for Washington to teach a set of countries to cherish their young people, not lead them to the slaughter. But in October, as it has done every year since CSPA became law, the White House again granted whole or partial “waivers” to five countries on the State Department’s “do not aid” list: Chad, South Sudan, Yemen, the Democratic Republic of the Congo, and Somalia.

Too bad for the young — and the future — of those countries.  But look at it this way: Why should Washington help the children of Sudan or Yemen escape war when it spares no expense right here at home to press our own impressionable, idealistic, ambitious American kids into military “service”?

It should be no secret that the United States has the biggest, most efficiently organized, most effective system for recruiting child soldiers in the world.  With uncharacteristic modesty, however, the Pentagon doesn’t call it that.  Its term is “youth development program.”

Pushed by multiple high-powered, highly paid public relations and advertising firms under contract to the Department of Defense, the program is a many splendored thing. Its major public face is the Junior Reserve Officers Training Corps or JROTC.

What makes this child-soldier recruiting program so striking is that the Pentagon carries it out in plain sight in hundreds and hundreds of private, military, and public high schools across the U.S.

Unlike the notorious West African warlords Foday Sankoh and Charles Taylor (both brought before international tribunals on charges of war crimes), the Pentagon doesn’t actually kidnap children and drag them bodily into battle.  It seeks instead to make its young “cadets” what John Stuart Mill once termed “willing slaves,” so taken in by the master’s script that they accept their parts with a gusto that passes for personal choice. To that end, JROTC works on their not-yet-fully-developed minds, instilling what the program’s textbooks call “patriotism” and “leadership,” as well as a reflexive attention to authoritarian commands.

The scheme is much more sophisticated — so much more “civilized” — than any ever devised in Liberia or Sierra Leone, and it works.  The result is the same, however: kids get swept into soldiering, a job they will not be free to leave, and in the course of which they may be forced to commit spirit-breaking atrocities. When they start to complain or crack under pressure, in the U.S. as in West Africa, out come the drugs.

The JROTC program, still spreading in high schools across the country, costs U.S. taxpayers hundreds of millions of dollars annually.  It has cost some unknown number of taxpayers their children…