A documentary about the struggle of the people of Jeju Island, South Korea, who are opposing the military advance of the United States, just as their parents and relatives did in 1947. They are being arrested, jailed, fined, and hospitalized for nonviolently resisting the construction of a massive naval base that will accommodate America’s “pivot to Asia,” and will destroy their 400 year old village and their UNESCO protected environment. 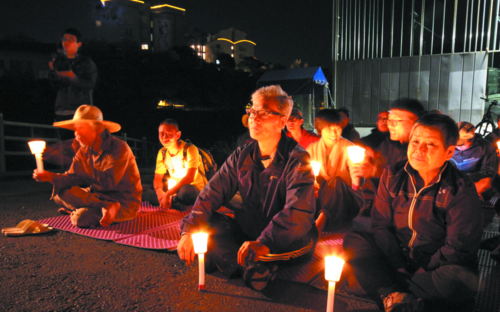 With careful attention to detail and chronology, Tremblay lays out the case justifying the Gangjeong villagers’ fervent protest against yet another military oppression of their island, highlighting the role of the anti-base activists, including many Korean Catholic priests and nuns, ordinary Korean people, and activists from many other countries. He also explains the endangered marine life on rare coral reefs now being dredged out of existence, and the villagers’ simple and sustainable lifestyle that will be lost once the base is built…

Tremblay was still in the early stages of learning about Jeju history when he was on the island to film the protests in 2012. He described how he was told by several people how he would not really understand the history until he visited the April 3 Museum, which documents a massacre that took the lives of thousands of Jeju Islanders. The massacre occurred starting on that date in 1948, in response to an uprising of the people there, and the oppression and genocide continued in several incidents until 1950. The uprising was then characterized by the government as a Communist plot; it is now seen as simply a peasant rebellion.

The cruelty of that massacre, during which over 30,000 women, children, and elderly people were shot down and villages were burned, is seared into the cultural memory of that place. The leadership of the Korean military by the U.S. military at that time is documented in detail in the museum exhibits.

Ghosts of Jeju: The history behind the resistance to a naval base on Korea’s island of peace | Twin Cities Daily Planet

Here is another article from The Heights at Boston College: Chomsky, Activists Protest Base on Jeju Island