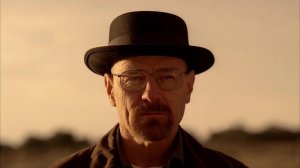 This is a fantastic editorial about America’s “Walter White” logic since 9-11 and the slippery slope of moral relativism.

“Americans are, like Walter White, a self-justifying sort. We see ourselves as exceptional. Often times we behave as if the rules that apply to the rest of the world, rules we want constraining them, don’t and needn’t really apply to us…

What Americans have seen more clearly with every year are the consequences of granting ourselves extraordinary moral license, as if American exceptionalism means that anything we do is justified so long as there’s a chance defensible ends will be advanced. It’s Walter White logic we embraced—and it enabled morally monstrous behavior…

To tweak and repurpose a great line from Skyler White, this country needs someone to protect us from the people who are protecting this country.”

“It is therefore an error to judge the morality of human acts by considering only the intention that inspires them or the circumstances (environment, social pressure, duress or emergency, etc.) which supply their context. There are acts which, in and of themselves, independently of circumstances and intentions, are always gravely illicit by reason of their object; such as blasphemy and perjury, murder and adultery. One may not do evil so that good may result from it.”

Catechism of the Catholic Church