Eisenhower in 1961: “This conjunction of an immense military establishment and a large arms industry is new in the American experience. The total influence — economic, political, even spiritual — is felt in every city, every statehouse, every office of the federal government…”

Well, now more than ever. After 50 years of making stuff for killing, and a decade of lucrative contracts for weapons manufacturers, there is quite a surplus available. Hence, the Department of Homeland Security has been giving it away to local law enforcement agencies. $4.2 billion worth of military equipment has been given away. The products of the merchants of death now proliferate across our towns and cities, The Guardian reports:

America’s police are looking more and more like the military |  theguardian.com 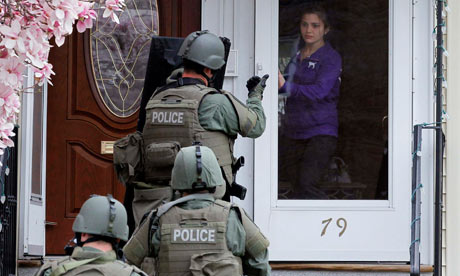 No, this won’t turn out badly at all. Simone Weil puts it best: 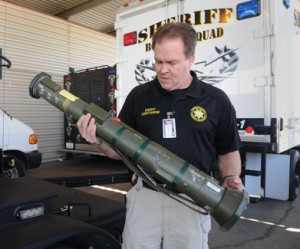 A Stanislaus Sheriff officer displays an “inert” rocket launcher provided by the Pentagon.

“A moderate use of might, by which alone man may escape being caught in the machinery of its vicious circle, would demand a more than human virtue, one no less rare than a constant dignity in weakness…Thus is the nature of might. Its power to transform man into a thing is double and it cuts both ways: it petrifies differently but equally the souls of those who suffer it, and of those who wield it.” — Simone Weil, The Iliad: A Poem of Might