The following is an excerpt from a Commencement address given in May 2014 at Thomas Aquinas College, a Catholic college in California, by Cardinal Edwin O’Brien, a former Catholic military chaplain and the former Archbishop of the Roman Catholic Archdiocese of the US Military for ten years before being named a Cardinal.

Is it really okay, if you can’t find a story from the New Testament to support what you do, to just make one up?

“One of my greatest challenges and responsibilities was persuading 19-year-old Catholics, who instinctively feel that there is some conflict between the Catholic faith and bearing arms, that they need not feel that way. I use the example of the Good Samaritan. The story is of a fellow who is beaten half to death, left dying. Two pass by, and they are big shots in the religious organizations of the time, and the third is a stranger, a Samaritan, who stops and pours oil on and bandages the wounded man. We all know the story well. Well, I say, ‘What would have happened a half hour before, if that Samaritan saw that this man was being pummeled half to death’? Would he have a right to step back and say, ‘I will become a Samaritan about a half hour after this is over,’ or would he not have a right and obligation to step in and do what he had to do—and only what had to be done—to bring about justice there? That is what the military is.

Military service is a Christian vocation, if only our people were conscious of the potential to adopt it as a Christian vocation. That is the role of the Church, to remind them that there need be no conflict, and that the Church considers—and always has considered—military service to be a lofty call: an act of love. Christ defined Himself as one who came to serve and not to be served. ‘No greater love than this, to give one’s life for a friend.’ Our kids are giving their lives for perfect strangers. Peace I leave you.” 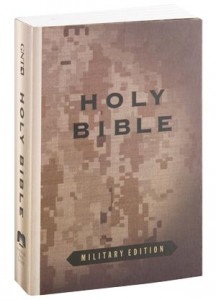 The Good News is now newer, improved, with better stories that are more relevant for our times, stories like The New Good Samaritan. Brought to you by the Archdiocese of Military Services. Coming soon to a Catholic bookstore near you!

3 thoughts on “The New Good Samaritan”