The National Catholic Reporter ran an editorial today called “Questioning our assent to militarism.” In it they write: “No one is suggesting that Catholics anywhere should go without spiritual guidance and support.” Exactly.

The question is: What kind of spiritual guidance and support are soldiers receiving from Catholic military chaplains? Chaplains are essentially federal government workers…might 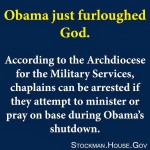 that not compromise them a little? We saw recently how the the furlough situation presented Catholic chaplains with challenges, in terms of their allegiances and autonomy, due to their being ultimately agents of the state. So it’s not out of line to suggest that they might be compromised in other ways, too, as a result of this. It would be silly to think that Church and State rarely, if ever, have conflicts of interest, and I think we saw during the furlough who is really in charge here (not the Catholic Church). If the government can prevent chaplains from saying Mass, the government can probably prevent them, or “strongly discourage them,” from saying or doing other things that the government doesn’t want them to say or do because of those conflicts of interest.

Just one example: When we called AMS to ask them how many Catholics had become Conscientious Objectors since 2002, they said they didn’t know. When we asked them what the process is to become one, they said they didn’t know, weren’t involved in that process, and advised us to go ask a military recruiter. Daniel Baker also said that, “No one knew about it on base, neither did the chaplains, because when I went to talk to one chaplain, he just talked about the Just War theory.” That seems to be a huge gap in the pastoral counseling provided, especially in wars such as these, does it not?

The NCR article goes on to state: “One of the more tragic elements in [Joshua] Casteel‘s journey from warrior to pacifist was his failure to find a Catholic chaplain with whom he could discuss his growing reluctance to participate in war. He said he found commanding officers more sympathetic to his point of view and more willing to smooth the way to conscientious objector status than he encountered in any of the priests he consulted.”

I know that if I worked for Apple, I wouldn’t go around my workplace criticizing Apple. Everyone who has ever had a job knows that you have to be a “team player.” Maybe that’s why AMS is recruiting, more and more, from within the military. After ten years of this “war” on “terror,” it’s probably getting harder and harder to recruit from the outside. Maybe they have better luck with people who have already been drinking the Kool-Aid for a while. Maybe at some point you stop seeing any conflicts of interest at all.